Relizon was not visible in the May Canada rankings from PSBL data, although internally we do see AS 40034 going from #208 to #109 by going from 11 spam messages in April to 26 in May.

CBL’s heuristics or spam traps or both were apparently much better at detecting this particular spam source.

Relizon’s own website doesn’t seem to be responding at the moment, but Bloomberg Businessweek says they do business process outsourcing solutions, and were formerly known as Crain-Drummond Inc., with the name change coming on acquisition by the Carlyle Group.

At least three anti-spam blocklists were taken down this week by Distributed Denial of Service (DDoS) attacks: Spamhaus, CBL, and APEWS. The first two are back up; the third is not.

The Composite Blocking List (CBL) currently has this at the top of its home page:

Commencing March 19 the CBL was hit by a very large-scale distributed denial of service attack. At the time of writing (March 21, 00:15 UTC) this attack is still ongoing.

Throughout this period the CBL DNSBL has continued to remain available through the CBL mirrors and via Spamhaus XBL (and Zen), and we’ve been doing our utmost to restore the rest.

Access to the lookup/removal page has just been restored.

The CBL rsync facility has been restored.

Email to the CBL is not working yet.

We ask for your patience while we finish restoring the rest of the CBL to service.

We never saw any interruption in data from the Passive Spam Block List (PSBL).

Spamhaus says it got a 75Gbps DDoS attack, according to Liam Tung with CSO Online (Australia) today:

END_OF_DOCUMENT_TOKEN_TO_BE_REPLACED

? Apparently because PSBL does not use the heuristic that CBL uses that catches the few IP addresses that are spewing hundreds of thousands or millions of spam messages a day. Is this lack of correspondence between the CBL and PSBL rankings a problem?

What would be the point of having multiple rankings if they always showed the same results?

But these are very different results: none of the CBL top 10 show up in the PSBL top 10! How can both the PSBL and CBL rankings be correct?

Besides, actually the CBL data does corroborate the PSBL data, when viewed in another set of rankings. END_OF_DOCUMENT_TOKEN_TO_BE_REPLACED

Data storage issues led to loss of some incoming data for the September 2012 SpamRankings.net. Interestingly, the results seem almost normal anyway. Here is a speculation on why that can be.

Look just under any rankings chart for September 2012 and you’ll see this notice:

The source of the problem was embarassingly simple and easily fixed: not enough inodes. The CBL and PSBL data were affected differently because they arrive differently. We pick up from CBL daily a text summary table with a line per IP address. We get from PSBL an NNTP feed of spam messages, each in its own file, that we boil down to a summary. So for CBL, we either got the whole file (most days of the month), or we didn’t store it at all (8 and 11 September). For PSBL, for each incoming message, we either stored it or we didn’t. Which is why there are some days with PSBL data between 4 and 15 Sep, but the volume is lower than usual. The notice below the chart is dire because we prefer to be conservative about these things.

As we’ve seen, Microsoft’s AS 8075 is back on top in the June 2012 SpamRankings.net from PSBL data. Actually, AS 8075 is a chronic offender, having been #1 numerous times, often placing in the top 10, and (we can see in internal data) never going below #38:

Also, CBL does often see spam from AS 8075 at the same time PSBL does, even though CBL has never seen enough spam from that ASN for it to place in the U.S. top 10 from CBL data. That’s a pretty dense graph, and internally it’s interactive for easy interpretation, but the dark purple line is PSBL volume and the lines with dots are various botnets and the like detected for AS 8075 by CBL. We can drill down to which IP addresses are producing the spam indicated by such rankings and graphs.

The main point is even mighty Microsoft often emits spam. Any big corporation is likely to have similar problems, because, like in the case of medical organizations, they’re likely to have some employees who will fall for phishing or other exploits. Even the most Internet-security-savvy organization can’t catch them all. SpamRankings.net can help with that, both by providing incentive (do you want your organization to be at the top of the rankings?) and by providing drilldowns to help localize the problem (so you can fix it and brag about dropping off the rankings).

Snowshoe spam took #1 in Canada again, through AS 32613 IWEB-AS, on the May 2012 SpamRankings.net. That was the first week of a spam plateau per ASN. The next week saw a platau for AS 33139 CANACA-210. And the next week it was AS 6407 PRIMUS. Canada, land of spam plateaus! Does this mean spammers are shifting from ASN to ASN for successive weeks of spam campaigns?

We actually saw less spam in May (CBL data) from Bell Canada’s BACOM than for any month since March 2011, the first month of rankings for SpamRankings.net. Congratulations Bell Canada!

The rest of the top six were upstarts, not much seen until recently. Iweb did make a bid for the top back in September 2011, but its recent predominance dates only from February of this year.

In the November SpamRankings.net from PSBL data, Global Crossing’s AS 3549 GBLX spiked on 17 November and a few days before, pushing it into fifth place.

Did this spam spike come from any particular botnet? AS 3549 GBLX PSBL spam volume left axis, CBL botnet volume right axis
It looks like GBLX is infested with many botnets, but the spike on 17 Nov roughly corresponds with a cutwail botnet volume peak on 16 Nov. Given that the ASN volume spike is from PSBL data and the botnet volume peak is from CBL data, a day off is plausible, due to different collection and delivery times.

There’s also a peak for grum (green line near the bottom) on 17 Nov, and peaks for festi and n/a on 18 Nov, where n/a is CBL’s marker for spam they detected without having to look as far as determining which botnet they think sent it.

We could try to resolve this question by digging into the specific addresses the GBLX spam PSBL saw came from and see if they match addresses CBL assigned to botnets.

Here’s why to look at more than one spam data source: according to the PSBL volume data for November 2011, Cleveland Clinic’s AS 22093 CCF-NETWORK spewed more than a hundred spam messages a day on multiple days, while CBL volume data showed Cleveland Clinic with only 42 spam messages for the entire month. Apparently PSBL’s spamtraps happened to be in the path of this CCF spam.

Now a couple of hundred spam messages a day isn’t much by world organization standards, but compared to what we’d all like to see from medical organizations (zero), it’s a lot.

Also compared to the other medical institutions in the same rankings from the same data, the pie chart looks like Pac Man and the bar graph looks like a hockey stick.

Maybe Cleveland Clinic didn’t get the memo after all.

A surprise in the July SpamRankings.net rankings: US medical rankings all went to zero by 14 July. World medical rankings went from hundreds and thousands to near zero between 17 and 24 July.

That’s in rankings from CBL data. PSBL shows much less data for medical organizations, yet nonetheless the same effect in both world and U.S. medical rankings.

No other rankings showed such a drop.

Did medical organizations actually clean up their act? Or did they just manage to whitelist their netblocks at CBL and PSBL?

A research project I’m assisting at the University of Texas at Austin notes that: 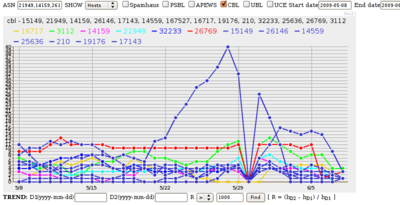