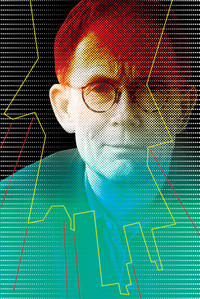 William Gibson talking about a shoe that appears in his latest novel, Spook Country:

Wired: One of the details that leaped out at me was the Adidas GSG9, named for the German counterterrorism squad. I felt certain you’d invented the shoe, but then I Googled it.

Gibson: The Adidas GSG9s were the obvious choice for the thinking man’s ninja. Nothing I could make up could resonate in the same way. There’s code in name-checking the GSG9 history — esoteric meaning. Something that started with Pattern Recognition was that I†discovered I could Google the world of the novel. I began to regard it as a sort of extended text — hypertext pages hovering just outside the printed page. There have been threads on my Web site — readers Googling and finding my footprints. I still get people asking me about “the possibilities of interactive fiction,” and they seem to have no clue how we’re already so there.

And not just for fiction. As blogs and the Daily Show have made clear, it’s silly for any political candidate or appointee to think any longer that they can like on video or the witness stand about documented facts, because it’s getting easier all the time to just google them. As YouTube has already demonstrated, such interactive reality can tip elections.

I wonder if this has anything to do with why some big companies are working on suppressing the Internet and Google has put its money where its mouth is in promoting open access.