Well, if this is true, it explains a lot as to why the U.S. is dragging far behind Japan and Korea (and probably soon Malaysia) in deploying broadband Internet:

Thumbnail  — In extensive detail, (over 460 footnotes, 330 pages) I prove, with the Bell’s own data, that  the Bell companies systematically lied about their previous fiber deployments  in order to get  changes to state laws to give them more money to build these networks. — What was  promised was fiber to the home, 45mbps, bi- directional, and capable of 500 channels, deployed in rural, urban and suburban areas equally.

By 2006, 86 million households should have been rewired.  More to the  point, these networks were funded by customers — about $2000 per household.

Meanwhile, Japan and Korea, seeing what was proposed in the states, went ahead and did it in their countries.

END_OF_DOCUMENT_TOKEN_TO_BE_REPLACED
Previously I mentioned that Exxon-Mobil had invested a few million dollars in PR against global warming. Well, I don’t know whether there’s actually any connection, but the same company posted its highest-ever profits last year:

Exxon’s revenue last year allowed it to surpass Wal-Mart as the largest company in the United States, and by some measures Exxon became richer than some of world’s largest oil-producing nations. For instance, its revenue of $371 billion surpassed the gross domestic product of $245 billion for Indonesia, an OPEC member and the world’s fourth most populous country with 242 million people.

Meanwhile, Exxon-Mobil says its profits rose 40% last year while the amount paid in taxes rose 14%. What does this mean to the rest of us? END_OF_DOCUMENT_TOKEN_TO_BE_REPLACED

Here’s one reason people are dubious about global warming: about $8.6 million pumped into 40 think tanks by ExxonMobil from 2000 to 2003. I suppose less than $9M over 3-4 years is peanuts to a corporation that size, and could be considered a sound PR investment.

Maybe for the current executives and big shareholders, who will all be dead before the largest effects of global warming come into play. I’m not so sure about the rest of us.

END_OF_DOCUMENT_TOKEN_TO_BE_REPLACED
I keep alluding to telcommunications companies wanting to limit the Internet. Here’s a pithy summary by Scott Bradner of how the Internet is different and what’s happening now. He notes that telephone companies were present at the earliest public demonstration of the ARPANET and AT&T was even offered an early opportunity to run it. None of the telcos were interested back then, so the followon Internet was mostly left alone both by the telcos and by government regulatory agencies.

This neglect meant that developers were free to experiment with new applications over the Internet. There was no carrier telling users what applications they could or could not run, no carrier that you had to get permission from before you were able to deploy a new Internet-based service. The Internet was just a collection of wires, most of which were bought from the telephone companies by ISPs, who paid what the telephone companies determined was a reasonable fee for use of the wires. The cost of the wire did not depend on what Internet services were running over it, just like the cost of your car does not depend on whom you transport in it. ISP customers paid the phone companies for the wires and paid ISPs for Internet service based on the size of the wire they were using. Everything was simple.

But some of the telephone companies want to change this. They want to charge Google and others to send packets to you. The fact that you have already paid for the wire and the Internet service that Google is using to send those packets is ignored. The phone companies say that they want to let Google pay more to make Google’s packets get to you “better,” but this is the blunt end of the camel well into the tent.

Blocking the power of the Internet By Scott Bradner, Network World, 01/16/06

Telephone companies always used to charge by time, which they do for the INternet in some countries, such as New Zealand, and in Europe some telcos succeeded in charging per byte for a while. Now in the states they’re moving to charge effectively by type of application. I think this means they need to fix their rates. They think otherwise, obviously. I think their thinking is a risk not only to their own businesses, but also to every business that depends on the Internet.

There’s a summary of the effects of Katrina on the insurance industry on Specialty Insurance Blog. The gist seems to be that reinsurance is pretty fast at paying off insurers these days, and that reinsurance handled Katrina pretty well. It’s from a study by Benfield.

The IBM VP makes a good point about potential conflict between open standards and shareholder value. And Joi rightly applauds him for making it.

However, standards bodies are not a panacea for all ills of openness.

END_OF_DOCUMENT_TOKEN_TO_BE_REPLACED

In case you ever wondered where U.S. tax dollars go, here’s a graphical summary: 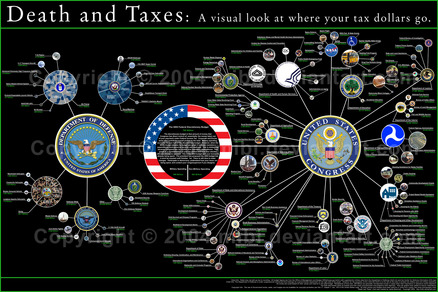 I can’t vouch for its accuracy. Thanks to Jamie for finding it. I’m sure Eisenhower would have been fascinated.

Forty five years ago this month, U.S. president Dwight D. Eisenhower gave a speech that seems to have accurately predicted the future:

Until the latest of our world conflicts, the United States had no armaments industry. American makers of plowshares could, with time and as required, make swords as well. But now we can no longer risk emergency improvisation of national defense; we have been compelled to create a permanent armaments industry of vast proportions. Added to this, three and a half million men and women are directly engaged in the defense establishment. We annually spend on military security more than the net income of all United States corporations.

This conjunction of an immense military establishment and a large arms industry is new in the American experience. The total influence — economic, political, even spiritual — is felt in every city, every State house, every office of the Federal government. We recognize the imperative need for this development. Yet we must not fail to comprehend its grave implications. Our toil, resources and livelihood are all involved; so is the very structure of our society.

In the councils of government, we must guard against the acquisition of unwarranted influence, whether sought or unsought, by the military-industrial complex. The potential for the disastrous rise of misplaced power exists and will persist.

— Farewell Address to the Nation, by Dwight D. Eisenhower, January 1961

Eisenhower had been the commander of all Allied forces in Europe during World War II. He later went into politics as a Republican, and when he gave this speech he was the president of the United States. He knew of what he warned, and it would appear by the ongoing lobbying scandals in DC that he warned correctly.

He did propose a solution.

END_OF_DOCUMENT_TOKEN_TO_BE_REPLACED
Doubtless everyone has heard about the Symantec rootkit. It wasn’t nearly as bad as the Sony rootkit. As F-Secure explained:

“Symantec’s rootkit is part of a documented, useful feature; it could be turned on or off and it could easily be uninstalled by the user.”

That’s all well and good, but it still created an invisible directory that miscreants could have used to hide malware.

That there’s been a big flap about this without either Symantec doing anything inappropriate with it or a miscreant taking advantage of it (so far as we know); I think it’s a good thing that public reaction has forced recall of the feature before it has done any known harm.

Risk management includes not knowingly including attractive nuisances in software.

Today is Martin Luther King Day in the U.S. So far as I know he never used the Internet, considering that even the ARPANET hadn’t been implemented yet. But he did occasionally talk about insurance:

But not only that, we’ve got to strengthen black institutions. I call upon you to take your money out of the banks downtown and deposit your money in Tri-State Bank-we want a “bank-in” movement in Memphis. So go by the savings and loan association. I’m not asking you something we don’t do ourselves at SCLC. Judge Hooks and others will tell you that we have an account here in the savings and loan association from the Southern Christian Leadership Conference. We’re telling you to follow what we’re doing. Put your money there. You have six or seven black insurance companies in the city of Memphis. Take out your insurance there. We want to have an “insurance-in.”

So it would appear that those particular S&Ls and insurance companies had additional priorities beyond making money for the shareholders. And that larger companies failing to address issues of interest to part of their potential customer base led to those customers addressing those issues otherwise. Or, paying too much attention to the bottom line to the exclusion of social issues can eventually adversely affect the bottom line. That seems like a risk to me.

What does this have to do with the Internet? Handing the Internet in the U.S. over to the control of a few large telcos, as could happen in the near future, seems like a pretty big risk.