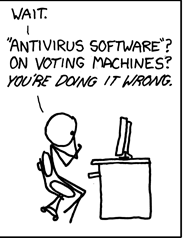 Xkcd has a point. And I like the teacher analogy.

Continuing to fiddle with models of how electronic voting might work while leaving in place demonstrably broken hardware and software produced by companies that over years have demonstrated they either don't understand the problem or have no intention of fixing it: that's fiddling while Rome burns.

This is true, but misses the point:

If ordinary bank ATMs can be made secure and reliable, why can’t electronic voting machines? It’s a simple enough question, but, sadly, the answer isn’t so simple. Secure voting is a much more complex technical problem than electronic banking, not least because a democratic election’s dual requirements for ballot secrecy and transparent auditability are often in tension with one another in the computerized environment. Making ATMs robust and resistant to thieves is easy by comparison.

Yes, and Lyndon Johnson stole a Senate race by ballot box stuffing back in the days of all-paper ballots.

But that doesn’t change the simple fact that it’s far easier to fiddle results with paperless electronic machines than it was with paper ballots. Or that an ATM failure tends to be very localized and limited, while voting machines can be hacked in bulk. Or that the results of a failed election can be an unnecessary war, more than 4,000 U.S. dead, a million others dead, quadrupled gas prices, $40+ trillion in debt, peak oil without deployment of solar and wind, environmental crisis near or beyond tipping point, and need I go on? At what level of demonstrated risk does it become obvious that waiting for perfect voting machines isn’t the right answer?

Fortunately, some states have gotten the point already.