Paul Graham points out that big company checks on purchasing usually have costs, such as purchasing checks increase the costs of purchased items because the vendors have to factor in their costs of passing the checks.

Such things happen constantly to the biggest organizations of all, governments. But checks instituted by governments can cause much worse problems than merely overpaying. Checks instituted by governments can cripple a country’s whole economy. Up till about 1400, China was richer and more technologically advanced than Europe. One reason Europe pulled ahead was that the Chinese government restricted long trading voyages. So it was left to the Europeans to explore and eventually to dominate the rest of the world, including China.

I would say western governments (especially the U.S.) subsidizing petroleum production and not renewable energy is one of the biggest source of current world economic, political, and military problems. Of course, lack of checks can also have adverse effects as we’ve just seen with the fancy derivatives the shadow banking system sold in a pyramid scheme throughout the world. It’s like there should be a balance on checks. Which I suppose is Graham’s point: without taking into account the costs of checks (and I would argue also the risks of not having checks), how can you strike such a balance?

He doesn’t neglect to apply his hypothesis to SOX: END_OF_DOCUMENT_TOKEN_TO_BE_REPLACED 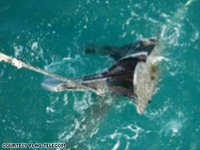 Sometimes it’s refreshing to look at other kinds of networks:

The Rhine River, Europe’s most busy waterway, will remain completely blocked for traffic at least until March 29, after M/V Excelsior lost 31 containers. No diversion is possible for about 200 ships arriving per day, which have to anchor at the Rhine banks. The financial loss for the masters, many of which own their inland freighters, is way up in the millions. Salvage of the 31 lost containers is made difficult by lack of equipment, there are not enough cranes & diver ships to work on more than 1 or maybe 2 sunk containers at a time. As officialls stated, a crack in the hull of chartered M/V Excelsior opend during a turn maneuver, being responsible for the list & loss of the containers.

For Internet problems there’s usually at least some way to route around, replace a server, etc. Except, of course, for the last mile, provided by the telco and cableco duopoly.