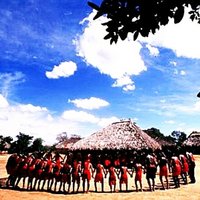 Can’t pass up an article with “Peril” in its title:

“I don’t think it’s a good thing, because it’s a threat to our culture,” said Tsereptse, who carries a bow and arrow with him at all times as a symbol of his position.

Some of the tribe’s younger members have been trying to convince Tsereptse that computers will have the exact opposite effect — that they can be tools to record and preserve Xavante folklore and traditions, and to disseminate them all over the world.

These are members of the Xavante tribe in Mato Grosso state in Brazil. They don’t have electricity yet, but they’ve decided to get Internet access. Why? END_OF_DOCUMENT_TOKEN_TO_BE_REPLACED