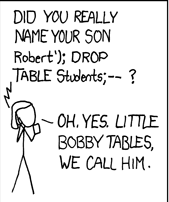 One of the cardinal rules of computer programming is to never trust your input. This holds especially true when your input comes from users, and even more so when it comes from the anonymous, general public. Apparently, the developers at Oklahoma’s Department of Corrections slept through that day in computer science class, and even managed to skip all of Common Sense 101. You see, not only did they trust anonymous user input on their public-facing website, but they blindly executed it and displayed whatever came back.

The result of this negligently bad coding has some rather serious consequences: the names, addresses, and social security numbers of tens of thousands of Oklahoma residents were made available to the general public for a period of at least three years.

But the best part is what it took to get the state to fix it: END_OF_DOCUMENT_TOKEN_TO_BE_REPLACED