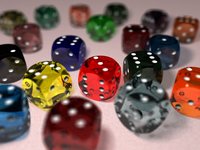 Speaking of Black Swans, here’s an interesting point in a review of Nassim Nicholas Taleb’s book on that subject:

Why do we base the study of chance on the world of games? Casinos, after all, have rules that preclude the truly shocking. And why do we attach such importance to statistics when they tell us so little about what is to come? A single set of data can lead you down two very different paths. More maddeningly still, when faced with a Black Swan we often grossly underestimate or overestimate its significance. Take technology. The founder of IBM predicted that the world would need no more than a handful of computers, and nobody saw that the laser would be used to mend retinas.

— The perils of prediction, From The Economist print edition, May 31st 2007

If a casino sees a black swan (a really big winner), it’s likely to escort that person off the premises permanently, and maybe have a few words with whichever card dealer or one-armed-bandit programmer let that happen. If ordinary people hear somebody saying a really destructive event is likely to happen, they’re likely to call him a mad dog, no matter how good his data.

Yet black swans happen. While by their nature they’re hard to predict precisely as to time or place, it’s good risk management to admit they can happen and to have a plan for that eventuality.