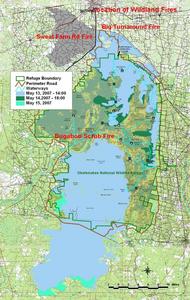 The southeastern coastal plain from east Texas to southern Virginia used to be mostly one huge longleaf pine forest. This forest evolved with fire; it’s supposed to burn periodically, from fires set by lightning, and for about the past 15,000 years, by people.

Indians and early European settlers understood this, and would deliberately set fires in appropriate seasons, burning fallen pine needles and flammable grasses and clearing out the underbrush.  The fire-resistant bark of the pine trees kept the trunks mostly harmed, and the branches of those trees were far above the flames.

In the late 19th century and early 20th century, forestry started to be a profession, and the earliest professional foresters were either from the north (where if white pine forests caught on fire, especially if full of dead limbs from bad logging, the whole trees would go up like torches) or from Europe (where there basically aren’t any natural forests, and nobody wants what woods they have to ever burn). So the party line became to stamp out forest fires.

It took many decades for someone to discover why the native forests weren’t regenerating, what to do about it, and to convince the official forestry establishments to change their tune, which sort of happened in the 1940s. This is a long story involving quail plantations in Georgia and their financier owners in their club in Manhattan; see Looking for Longleaf, by Lawrence S. Earley. 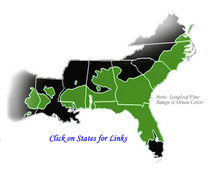 Smokey Bear was born in the 1940s, and while "Only You Can Prevent Forest Fires" makes sense in some ecosystems in some ways, it’s not a very good model for southern pine forests. The various forestry services have since come around, and Georgia Forestry not only recommends but will come out and help with prescribed burns.

However, much of what passes for forest in Georgia and Florida these days is industrial pine plantations, largely two other native pine species, loblolly or slash, planted in rows, all the same size ("even-aged management", it’s called).  If it’s dry enough when one of these gets started burning, they can all go up at once.

Plus the Okefenokee Swamp, famous as a wilderness, has largely been logged, so that what’s in there isn’t 500 year old cypresses anymore. The owners of the land around the Okefenokee are aware of the problem, and have banded together (more on that in another post), but apparently whatever they’ve been doing didn’t work very well this year. The Bugaboo fire crossed over into Florida, too, and firefighters have been called in from as far away as Palm Beach County in Florida and Texas. I only know all this because of participatory posts on the web.

The way these wildfires happened is different, but the outcome is much as Chandler wrote: we’ve lost "the naturally fire-limiting multi-level ecosystem of old growth forests."  With more than 90% of the original forest gone, most of that missing for most of a century now, it’s not suddenly going to spring back, either.  There are movements in that direction, and I’ll probably post on that, too, but Georgia’s biggest industry is timber, so those industrial even-aged pine plantations aren’t going to vanish suddenly, either.

As Jim said, "News sources didn’t quite have an idea about how important it would be to cover this story and didn’t always double check that information.Reporters have to cover all sorts of stories every day, and can’t be experts on every subject.  Most of them probably don’t know anything about southeastern fire forests or peat swamps.

Regarding risk management, it is important to know something about your specific risk swamp.  If you apply a risk management regime from some other ecology, you may find it fails badly for your peat and pines.  This is yet another reason it would be good to have as much past history as possible.

Meanwhile, 55 out of 67 Florida counties have wildfires, and the smoke is visible as far as Birmingham, Alabama and Meridian, Mississippi. That’s around 400 miles from the fires.

For comparison, that’s about Pittsburgh or Cleveland distance from New Jersey, where a fire apparently set accidentally by the Air National Guard has burned about 20 square miles. That’s about the size of Manhattan Island. All of New York City is about 300 square miles. For comparison, just the fires in and around the Okefenokee (Bugaboo + Sweat Farm Road) have burned more than 500 square miles, not counting the more than 200 other wildfires in Florida and Georgia.